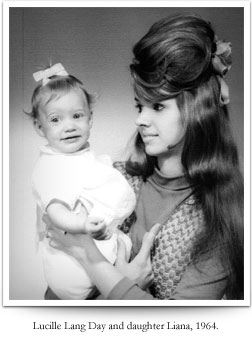 Lucy received her M.A. in English and M.F.A. in creative writing at San Francisco State University, and her B.A. in biological sciences, M.A. in zoology, and Ph.D. in science/mathematics education at the University of California at Berkeley, where she held a National Science Foundation Graduate Research Fellowship.

Her memoir, Married at Fourteen: A True Story (2012), received a 2013 PEN Oakland Josephine Miles Literary Award and was a  finalist for the 2013 Northern California Book Award in Creative Nonfiction. Her full-length poetry collections are Becoming an Ancestor (2015), The Curvature of Blue (2009), Infinities (2002), Wild One (2000), Fire in the Garden (1997), and Self-Portrait with Hand Microscope (1982). She has also published two children’s books, The Rainbow Zoo (2016) and Chain Letter (2005), and four poetry chapbooks: Dreaming of Sunflowers: Museum Poems (2015), God of the Jellyfish (2007), The Book of Answers (2006), and Lucille Lang Day: Greatest Hits, 1975-2000 (2001). With Ruth Nolan, she edited Fire and Rain: Ecopoetry of California (2018), and with Kurt Schweigman, she edited Red Indian Road West: Native American Poetry from California (2016). She is a co-author of How to Encourage Girls in Math and Science (1982) and the editor of SEEK (Science Exploration, Excitement and Knowledge): A Curriculum in Health and Biomedical Science for Diverse 4th and 5th Grade Students (2010) as well as Family Health and Science Festival: A SEEK Event (2010). Her books are available at bookstores and through Amazon.com and Small Press Distribution.

Lucy served for six years as a science writer and administrator at Lawrence Berkeley National Laboratory, and for 17 years as the director of the Hall of Health, an interactive museum sponsored by Children’s Hospital Oakland. When the Hall of Health closed, she served as a staff scientist at Children’s Hospital Oakland Research Institute to complete the museum’s research projects in health and science education. She has also worked as a freelance writer, technical writer/editor, school-district math/science specialist, math/science education consultant, and college lecturer. She is the founder and director of a small press, Scarlet Tanager Books.

Rebellious and willful as a teenager, Lucy first married at age 14 and gave birth at 15. Between the ages of 14 and 17, she did not attend school. In addition to mothering during these years, she worked as a sales representative for Beauty Counselor Cosmetics, a phone girl at Chicken Delight, and a gas station attendant. These experiences kindled her enthusiasm for academics.

She is of British, Swiss/German, and Wampanoag descent. Her father, Richard Lang, was a banker and photographer, her mother, Evelyn (née Evelyn Ellis Bumpus), a homemaker. Her ancestors include a lecturer in Hebrew at Oxford University in the 16th century, a man who fell off the Mayflower during a storm and was hauled back on board with a boat hook, the first person executed in Plymouth Colony (for murder), a woman who was whipped at the post for adultery, a Revolutionary War sergeant who fathered 22 children, a teenager who joined the Union Army and served in a regiment that was decimated by yellow fever, a man who traveled from Massachusetts to California twice during the Gold Rush but did not get rich, a Caucasian housekeeper who bore the illegitimate daughter of a Wampanoag man, and many other people who did wondrous, courageous, or despicable things. The mother of two grown daughters and grandmother of four, Lucy currently baby-sits often and lives in Oakland with her husband, writer Richard Michael Levine.

New Juvie has bright paintings on the walls
to celebrate the better things in life:
nature, growth, transformation. These murals
admonish, “Graduate! Put down your knife.”
Mustard-colored cells are stacked in tiers,
windowless, with built-in cots and stools,
where teenagers, alone, confront their fears
and contemplate new ways to break the rules.

The year I was thirteen I ran away
from home and landed here. Back then my cell
had a window. I could watch grass sway
on a hillside, hear jays and warblers call.
More pleasing than a work of art to me:
a glimpse of sky, a hummingbird, a bee.

I finally have become the proper girl
my mother always wanted me to be.
I don’t smoke hash or grass, wear mini-skirts,
pick up long-haired, tattooed men or party
till the neighbors call the police. My last
drunken binge was nineteen seventy.
My motorcycle-riding days are past.
I haven’t shoplifted since sixty-three.

Oh, Mama, what’s to become of me?
I’ve no regrets for anything I did—
the mescaline, the baby at fifteen.
Inside, I’ll always be your wild kid.
I’d gladly wear those mini-skirts again
if I had the legs I did back then.