In 2013, Married at Fourteen received a PEN Oakland/Josephine Miles Literary Award and was a finalist for the Northern California Book Award in Creative Nonfiction.

“Lucille Lang Day’s story of her life as a teenage mother and beyond is one of the great American contemporary memoirs.”
— Herbert Gold, author of Fathers: A Novel in the Form of a Memoir and Still Alive!: A Temporary Condition (a memoir)

“An inspiring story about paths, and selves, lost and found.” — Kirkus Reviews

“An honest and engaging memoir about a spirited woman who always knew what she wanted, even when—especially when—it was bad for her. Lucille Lang Day’s successful quest for fulfillment in romance, marriage, motherhood, education, and career makes a fascinating read.”
— Molly Giles, author of Iron Shoes

“Lucille Lang Day’s memoir proves that truth isn’t just stranger than fiction, it can be astonishing. The author went from teenage wild child and biker chick to prize-winning poet and holder of four advanced degrees. The mature Lucy writes about this unlikely trajectory with clarity, wit and affection for her younger self, a 14-year-old child bride and a disaster waiting to happen. You won’t find a more likable voice on the page, or a tale with a more satisfying ending. Parents of teenage forces of nature, take heart.”
— Cyra McFadden, author of The Serial and Rain or Shine: A Family Memoir

“Told with self-lacerating honesty and unvarnished prose that rises on command to poetic intensity, Married at Fourteen is the absorbing memoir of a young woman who struggles to find storybook romance and a purpose in life beyond it—and, against cruel odds, succeeds.  Lucille Lang Day, only child of an obsessive-compulsive mother and an indulgent but passive father, was gifted with brains and beauty but grew up an unguided missile, willful, reckless, and impulsive in her choice of lovers.  Her autobiographical quest, an anguished yet often touching family chronicle spanning three generations, transports the narrator across badlands of emotional chaos on her improbable route to domestic serenity and high accomplishments in both the arts and sciences.”
— Richard Kluger, Pulitzer Prize-winning author of Ashes to Ashes

“In Married at Fourteen Lucille Lang Day gives eloquent voice to the teenager she once was—precocious, beautiful, hungry for love and adventure, disrespectful of conventions, adept at getting into serious trouble. Her memoir is sexy, funny and endearingly honest.  She transports us into worlds of intense experience—having a baby at age fifteen, partying with Hells Angels, dropping mescaline. As Day begins to comprehend her calling to be a writer and a scientist, we watch the development of a fine intelligence and a wise heart.  Along the way we meet a bestiary of male chauvinists and a variety of psychotherapists—some helpful, some less so. Those of us who work with young people and their families can learn much from Day’s story.  It challenges the conventional wisdom that a teenage mom and dropout has no future and reminds us that rebellious kids who defy authority may become—as has Day—the innovators and creators that our culture needs.”
— Naomi Ruth Lowinsky, Ph.D., M.F.T., author of The Motherline and The Sister from Below

“Married at Fourteen catches a social class that is uniquely American but resonates with what I know of working people worldwide. Though the rebellion against mothers is universal, Lucille Lang Day carries it to a new extreme. And yet the tone is calm, upbeat, humorous, and she emerges a confident, strong woman whose values are tested and clarified in this exceptional memoir.”
— Leo Litwak, author of The Medic: Life and Death in the Last Days of WWII

“Married at Fourteen, Lucille Lang Day’s compelling new memoir, opens with the narrator, at twelve, holding a switchblade; an object which comes to symbolize a desire for self-protection and an object of defiance against a storm of conventional norms. A few years later she will write, ‘I’d proved to myself that I was in control of my own body, that neither society nor my parents could tell me what to do.’ Not that both didn’t try. As she makes her way in the world—from an early job as a phone girl at Chicken Delight to later work as a scientist and writer, from dropout to academic scholar, from young divorcee to happily coupled—this narrator comes buck up against what others want her to be. What propels her to break free of constraints, internal or external, can be found in a telling insight: ‘I sensed there was something just beyond my consciousness that I needed to know about my life.’ This illuminating memoir tracks that search for something just beyond the No Trespassing signs, that expansive terrain which allows for a freer range of motion. Married at Fourteen is a testament to the independent spirit and indomitable will of a woman whose reinventions show the way to transformation and hope.”
— Toni Mirosevich, author of Pink Harvest and The Takeaway Bin

“Married at Fourteen is the story of the late and somewhat surprising discovery of genuine family by someone who was—in her own terms—‘a bad girl.’ She survives les bas-fonds to become a respected poet, scientist, and educator. The book tells us that a restless, not easily satisfied, constantly questioning intellect may, in the right situation, pull us away from Dropout City towards love, satisfaction, a world—these are the last words of the book—‘alive with offerings.’”
— Jack Foley, KPFA literary host and author of Visions & Affiliations: A California Literary Time Line

“The saga Married at Fourteen is many things: both a cautionary tale and a tale of redemption, a multigenerational account of the passing of an era, a parable of the Prodigal Daughter, a gripping narrative rendered from a tenacious memory, a scientist’s precision and an artist’s sensitivity. Parents should read this book, teachers and counselors, dreamers and seekers, anyone who wants to read a book that once you pick up you’ll find hard to put down. While you will not condone all of Lucille Lang Day’s actions—she does not expect you to—you will understand, sympathize, and perhaps sometimes see yourself more clearly.”
— Adam David Miller, author of Ticket to Exile and The Sky is a Page 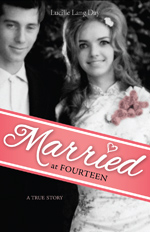 From “Married at Fourteen”

I started seriously looking for a husband when I was twelve. I’d had enough of being a child, enough of being told what to do. I was unhappy at school; I resented homework; I didn’t get along with my mother. Having seen movies like South Pacific, Sayonara, and A Summer Place, I believed in true love. More than anything, I wanted Rossano Brazzi, Marlon Brando, or Troy Donahue to come rescue me from my childhood. I wanted to be an adult, to be free, and to be loved.

The grown-ups always warned that getting pregnant as a teenager would ruin your life, but I didn’t believe them. I felt that in truth my life would be ruined if I had to live with my mother much longer: her nagging would drive me crazy. And my sanity would benefit even more if I could be freed from boring math drills and stuck-up classmates. A high school diploma? I didn’t need one. I already knew everything I’d ever need to know.

My thoughts on all these things began to crystallize in the summer of 1960, after my sixth-grade graduation from Egbert W. Beach School in Piedmont, California. That summer I went to Camp Augusta, where Piedmont Blue Birds and Campfire Girls rode horses, swam, wove key chains from long strips of colored plastic, and painted daisies on salt and pepper shakers for their mothers. On the bus, which took us from the Piedmont Community Center to the Sierra foothills, we sang “Ninety-Nine Bottles of Beer on the Wall” and “A Hot Time in the Old Town.” But my fun was to be short-lived. Singing on the bus, I had no inkling that once at Camp Augusta, I would spend my time figuring out how to avoid the broom treatment, and that having accomplished that, I would dive headlong into a turbulent adolescence.